Yesterday I unbagged and unfolded my Brompton and realised that while we've had the odd mention or short thread in the past, we haven't really had a proper Brompton Bicycle thread on the forum.  Considering Julian Vereker's involvement in Brompton, I decided it's time to see what interest there is in this iconic bike amongst Naim fellow owners.

I'd like to start this thread off by focusing on the link between Naim Audio and Brompton and quoting a passage from the start of Chapter 4 of David Henshaw's 2009 book, Brompton Bicycle (Hopefully David does not mind), where he introduces Julian to the story;

"He had a fine ear for music, but couldn't play himself, something that might have been a frustration for anyone else, but Julian turned to recording live music for friends. In echoes of Andrew Ritchie [Brompton founder & Inventor] and the folding bike, he was appalled by the quality of commercial amplifiers, and in time-honoured tradition, set about making something better. This quest to reproduce music with the utmost fidelity was to be the driving force behind Naim Audio, then and now.

At a time when the Japanese electronics giants were cutting a swathe through the global audio industry, Naim was (and remains) a remarkable enigma. A small British company, with headquarters in Salisbury, Wiltshire, Naim was able to compete with the big global players through the sheer quality of its products. Julian Vereker went on to add a classical music label, again applying the very highest standards to the genre.

A successful businessman by the age of 40, he had no need to get involved in new projects, and could have sat back to enjoy his growing wealth. But Julian was a born salesman, and he was also a perfectionist. That desire to champion the best product in its class made him a natural Brompton ally, and just what the company needed  in the mid-1980s.  Vereker also had a passion for sailing, commissioning and designing several yachts, and it was whilst cruising in northern France in 1982 that he first came across the Brompton."

If you would like to read more then I can highly recommend David Henshaw's book.  It's published by Excellent Books (great name) and is very affordable at just Ł12.00.  Oh, and the author dedicates the book to Julian Vereker. 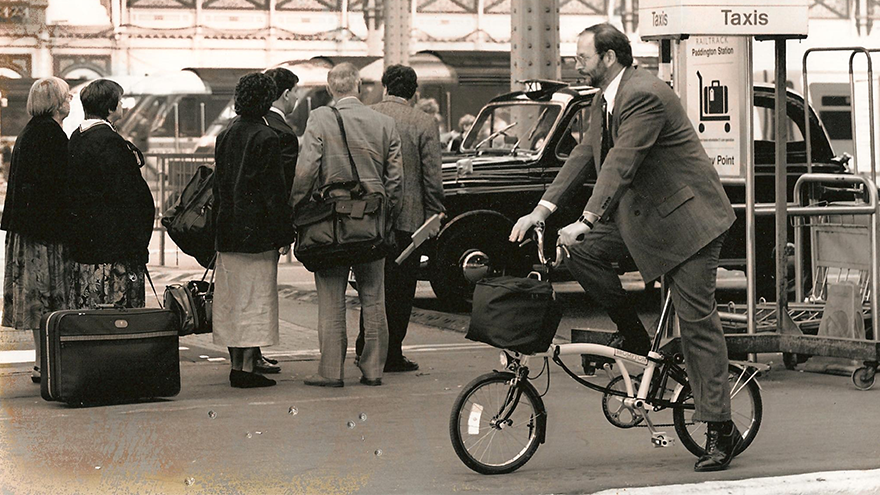 So here's my own Brompton - an orange and black Mark 4 M3L that's around 10 years old and standard apart from a Brooks leather saddle. She doesn't get used as much as I would like these days, but is always handy in certain situations.  For example, next week I need to take one of the cars to the garage for a service.  The garage is near Rye so it'll take the Brompton with me and take a ride around Rye Harbour and the bird sanctuary while its being done.  It's a great bike to ride, and has a much bigger bike "feel" than you expect.  I can quite understand the appeal (sometimes with a fervour bordering on love) that many owners feel for their Bromptons.  It's always something of an occasion when you get to unfold the bike and clip it all together and then set off on a ride. 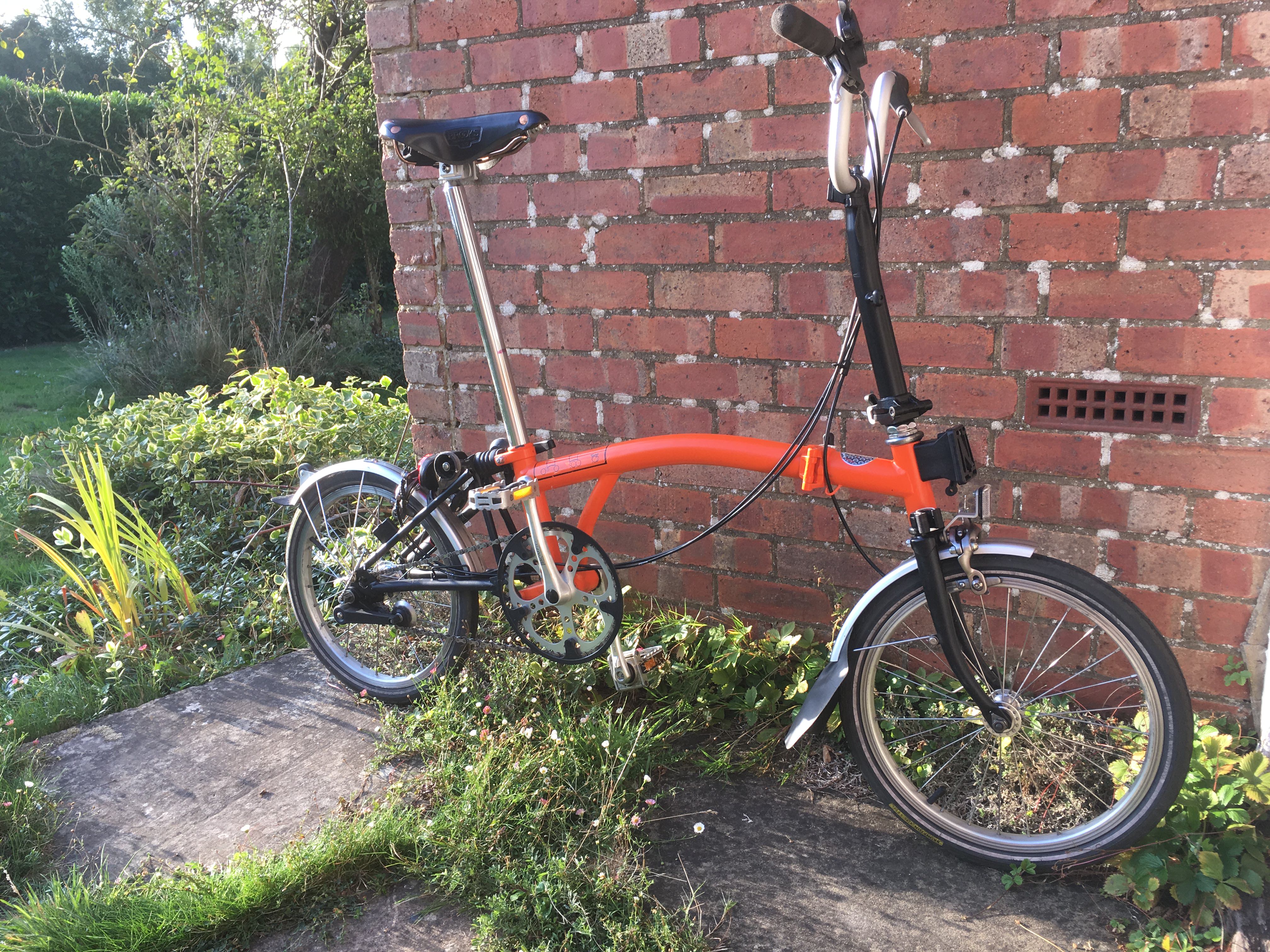 So who else here is either a past or current Brompton owner?

Not a Brompton owner, but did read a v positive review if the electric Brompton that's just hitting the market. By all accounts it's tremendous. I'll find a link later.

An iconic design that looks fabulous propped up on its own. Rides well, but I always felt like a numpty pootling around on one.

Never been a user although thought I would add Richard as I have  friends who share their Brompton amongst numurous other bikes they own.And thoroughly enjoy it as a bike.I think what they love is you can fold it up if the weather is bad and take it on the train and bus.I commute 9 mile round trip most days and where I live we are blessed with a comprehensive cycle path network and the amount of times I have been passed by a cyclist on a Brompton and watched as they soon have 100m ...200 m ...300 metres on me.And I am riding a nice cyclocross bike which is pretty efficient,so as an observation they are no slouches considering how small the wheels are.

Yeah an Iconic design classic.There is something very English and bespoke about the company with their innovation and longevity.....A bit like Naim

I owned a Brompton several years ago.

Never actually summoned up the courage to take it on to the always packed bus for the rush hour commute in to Cardiff and back.

I did use it many times at the caravan park in West Wales. I must agree that they are more stable to ride than you would imagine.

I've never owned one either, but do rather fancy one. I entered the ballot to try to secure a place in the Brompton World Championship this year, but was unlucky. If I had won a place, I'd have had to buy one! The world championship is in London on the same weekend as the Ride London 100 event and has a Le Mans style start, where the riders run across The Mall, assemble their bikes and then ride eight laps round St James park (The Mall, Birdcage Walk, Horseguards). No Lycra is allowed. It is a real hoot. There are several videos on Youtube, one of my favourites being David Millar, the ex-pro cyclist who I was sure was going to win, but couldn't assemble his bike.

My other half used to use one - a remarkably efficient piece of engineering.

Nick, I'm not sure I understand your post. Do you mean you live in London with four Bromptons?

Yep, proud owner. I had it in my office in London and used it to get around to meetings etc. I used a road bike into and out of the office but the Brompton is fantastic just to get around with. I also use it for site visits where I have taken a train to a city and need to get around. It needs adjustment so that it is comfortable and it is very easy to have the saddle too far forward in my experience so you can carry it using the nose of the saddle. But a fantastic bit of kit.

I have admired the Brompton in Palo Alto in all its iterations.  It is very cool, and I can see what you all like about the line,  but, among all the bikes I would love to own, it did not make it onto my list.

Another way to ride about as an eccentric peddler.