Rumour is - out 9th November.

4LP set: 2-LP stereo remix of the album by Giles Martin, akin to his treatment of Pepper last year; plus two futher LPs of Esher demos.

6-CD deluxe set: as above, plus a further three CDs of jams, outtakes, demos etc. 50 or so tracks in all. But 'Carnival of Light' or the 27-minute 'Helter Skelter' aren't included.

But there will a blu-ray with 24/96 stereo AND mono versions of the album, as well as a new 5.1 mix by Martin fils. 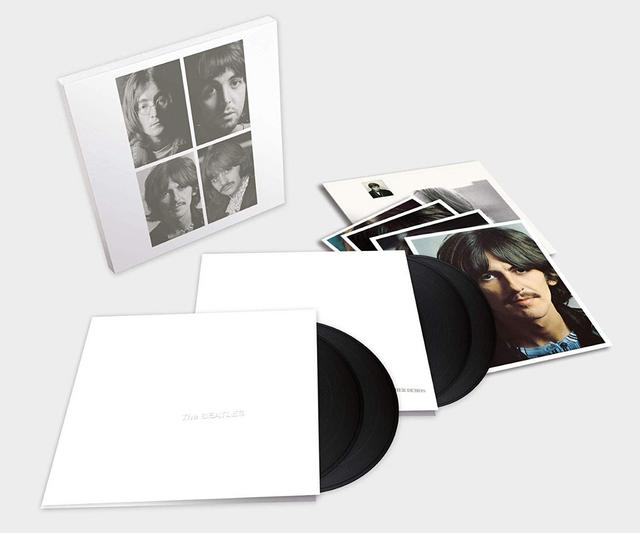 For those interested, this is what the cover of the 4-LP box will look like (taken from the River in Japan). I believe the CD set will follow the same format. 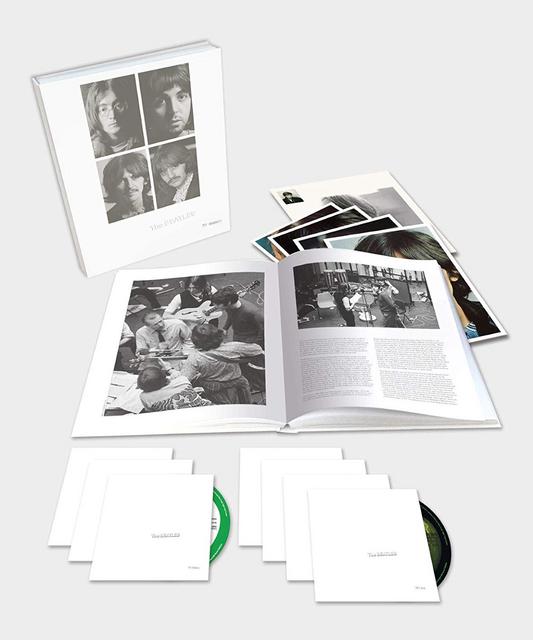 Kevin, any pricing indications yet in amongst those rumours?

I am going to have to get this probably the Lp version.

Kevin, any pricing indications yet in amongst those rumours?

Not yet Richard, but going by the Pepper reissues of last year, I reckon ú50 or so for the LPs, ú30ish for the CDs and ú100 for the super deluxe...

Apparently there's a version of 'Let It Be' on the big set, which is previously undocumented. It seems it was written, rehearsed and taped during the WA sessions but not properly recorded by the band until the following year...

Given the stunning level of sound on the Giles Pepper set, I'm in. To what depth, we'll see, as it doesn't have quite the magic for me as Pepper.

What I'd give for him to jump back a couple of years and do a number on Revolver...

As impressive as Giles Pepper set was, I think it's a shame that everything is so "in your face" regarding the mix. It seems so typical of the loudness wars problem where the dynamic range is reduced to be almost nothing. I tend to find myself still plying the original with the occasional listen to the new version.

This is exciting news.

(Hopefully that price will come down)

Dammit, they want more of my money again.

(Hopefully that price will come down)

if it's anything like the music quality of the remastered St.Pepper we should be in for a treat

Check out Pledge Music - much, much cheaper there; only ú110 for the super deluxe, for example.

Check out Pledge Music - much, much cheaper there; only ú110 for the super deluxe, for example.

Super deluxe ordered!  After my trip to Abbey Road for one of their lectures this year my appetite for all things Beatles is well and truly whetted!

I suppose it is too much to hope that they will offer the 96/24 as a download from the beginning, instead of forcing people to eithÚr hack the Blu Ray or wait a year?

I see this is available on all streaming platforms in all its glory.

Iĺm  holidaying at the moment, hope to get a listen on iPad later today.

I see HighResAudio have two version for download,  Super Deluxe 107 track & Deluxe 57 track in 24/96 FLAC.  Disappointing that there is not a download of only the original album tracks.        I bought the Deluxe Sgt Pepper & after a few listens to all the out takes, experiments, foundation tracks & studio chat I decided it was no more interest & not something for a musical listening session.  So I made a copy & stripped out all the extra tracks leaving just the original Sgt Pepper tracks.  So the new White Album, thanks but I'm Out.

Posted on: 09 November 2018 by hungryhalibut

Qobuz have the deluxe, which is the album and the Esher demos, for ú32 or ú16 if you are a Sublime subscriber. I wouldnĺt want all the other stuff, but ú16 sounds fine for the album.

I'd really just want the Esher demos on their own...! Ah well.

I've downloaded the Deluxe from Qobuz at ú15.99 and given a couple of tracks the onceover compared to the 2009 remaster, which I thought was fine.

Back In The USSR - firstly the remix is quieter, with more bass clarity and weight, and the whole thing sounds more refined. In a good way.

While My Guitar Gently Weeps - again less loud, greater bass thwack and the level of transparency in the mix quite wonderful, for example the double tracked vocals at around 3:00 is a hair-raiser. One thing though, the ending section (from about  3:40) they seem to have brought up George's wails in the mix. Faithful or not it adds an extra poignancy to it (and there's a single piano phrase right at the end of the fade-out that's been brought up in the mix).

So, all good so far and a steal for Qobuz Sublime subscribers. A listen to the whole thing in relaxed mode later...