Much anticipated, and with the release delayed a few times, the Don Rendell / Ian Carr Quintet Complete Lansdowne Recordings box set has finally arrived thanks to Jazzman records.  My own set arrived today, and I couldn't wait to find out whether the reissues live up to the high expectations. The project itself was something of a labour of love for all concerned, and in particular a great deal of licensing must have been involved, not least for the use of logos etc.. in order to perfectly replicate the album and label artwork.

Unfortunately, with originals fetching four figure sums, there was always the opportunity for some to want to take advantage of what was going to be a limited release of 1000 sets.  As it is, there are already resellers asking for many times the original cost of the reissue, so if you successfully managed to order and secure a copy then well done.

Mark Allbones of Grand Vinyl ltd. who organised the packaging and pressing of the reissue posted the following on discogs about the project;

Jazzman had been trying to license these five rare LPs as a "dream" reissue project for many years. It took a long time to persuade and secure publishing/mechanical/artwork rights from Universal and at the time of finally brokering a license (around a year ago) Jazzman was unsure of precisely what the level of demand might be for such an expensive box set. The license cost was astronomical before even considering the manufacturing cost of lookalike flipback sleeves and textured slipcases. 1000 copies were agreed upon primarily because Jazzman LPs are pressed in runs of usually just 1000 apiece. The inked deal sadly does not allow for represses and to do so requires another contract to be agreed. Jazzman is hoping to be able to press more of these LPs in 2019, possibly even just as individual sealed albums, but this is wholly dependant on the agreement of the license holders. As many know, major labels are often laissez-faire about the material they own until it begins to sell through third-party deals like this one and, now that the high demand for this box is more evident, it's possible that Universal will want to release a similar repress themselves; not allowing any other independent label a look-in. Distribution into retail is not controlled by Jazzman, of course. If some stores scored 50 units and others none, that's down to the bulk distributors. I should point out that this item was made available for pre-sale, directly from Jazzman, in September 2018. Once the copies actually arrived with Jazzman HQ in December and were announced online, they unexpectedly sold out in minutes. Jazzman is staffed by one (Jazz) man, however. He has no PR, research, sales or marketing teams to assess exact demand nor immediately respond to huge influxes of emails, social media messages etc. Apologies to those who asked for copies too late and didn't get a timely response. Jazzman has been somewhat inundated. Hinsight is 20-20, as they say. We hope that Jazzman can secure another pressing as soon as possible. 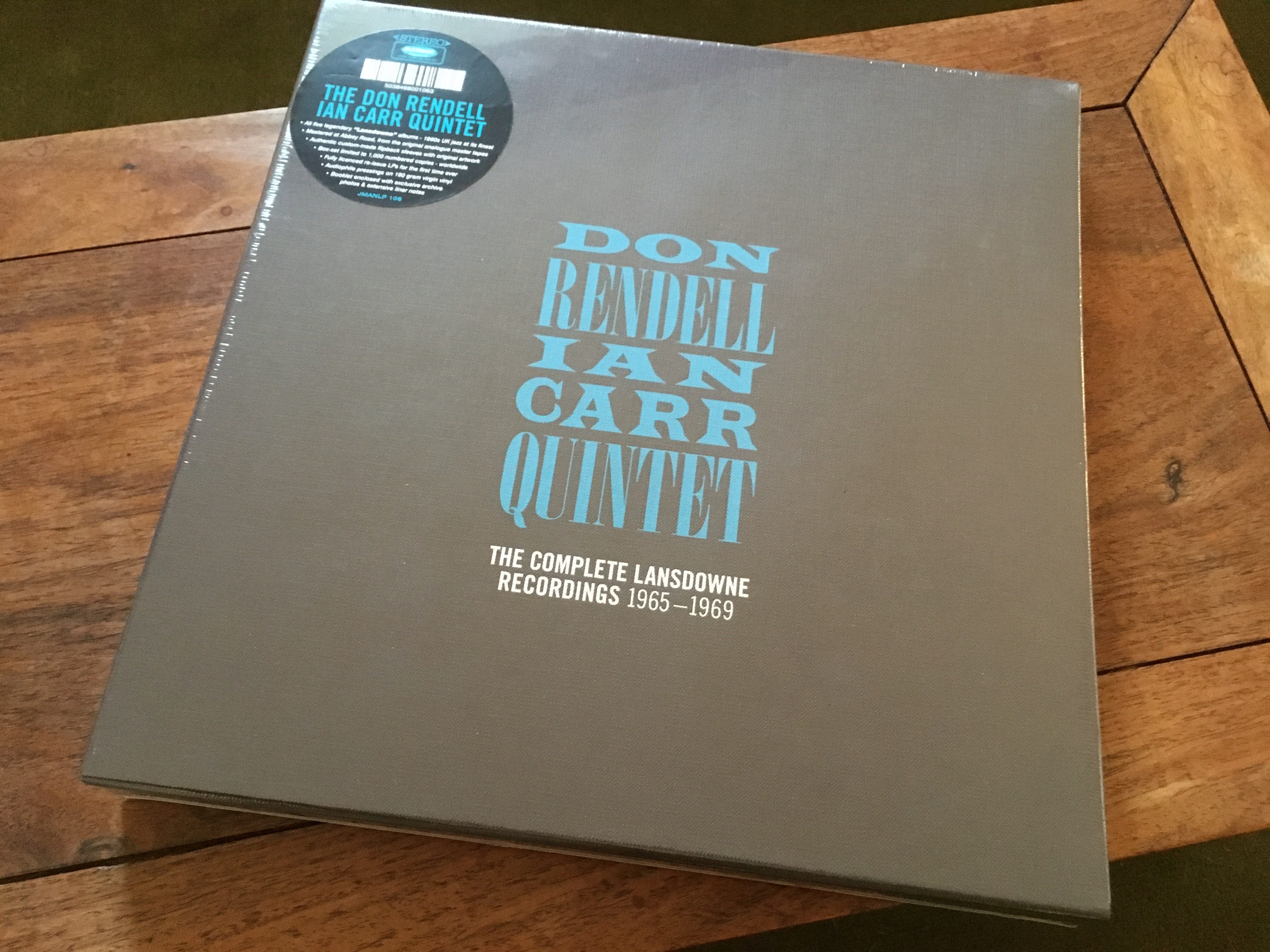 The LPs come in a lovely textured slipcase. Along with the 5 records you also get an illustrated booklet, detailing each LP release and with notes by Ian Carr biographer, Alyn Shipton. If I have a criticism it's that the fit of the slipcase is fairly tight, so getting the individual LPs in and out can be a little tricky.

The LP sleeves are lovely - so nice to see that the artwork is replicated so well, front and back, and what a joy to have flipback sleeves just like the originals. 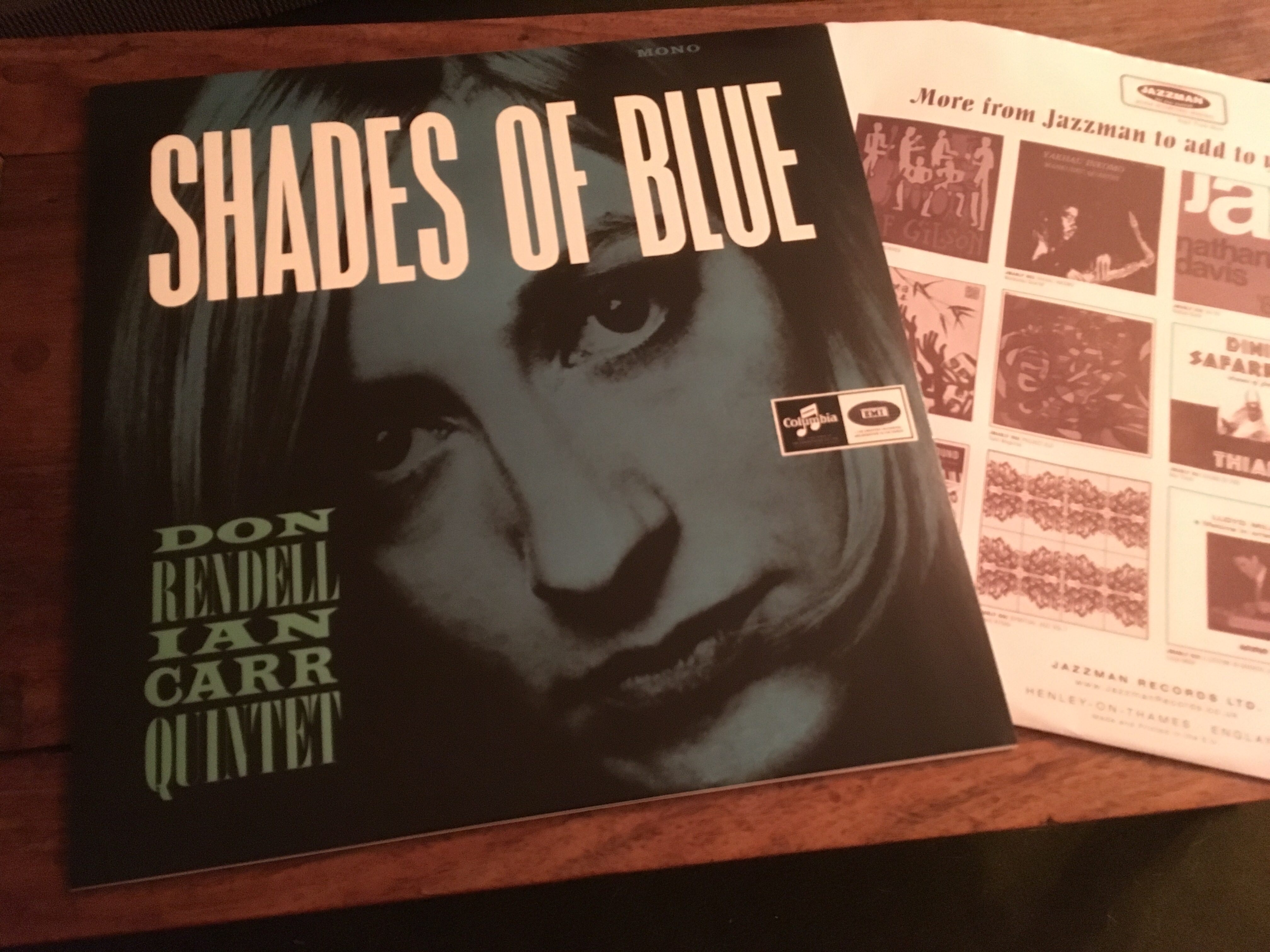 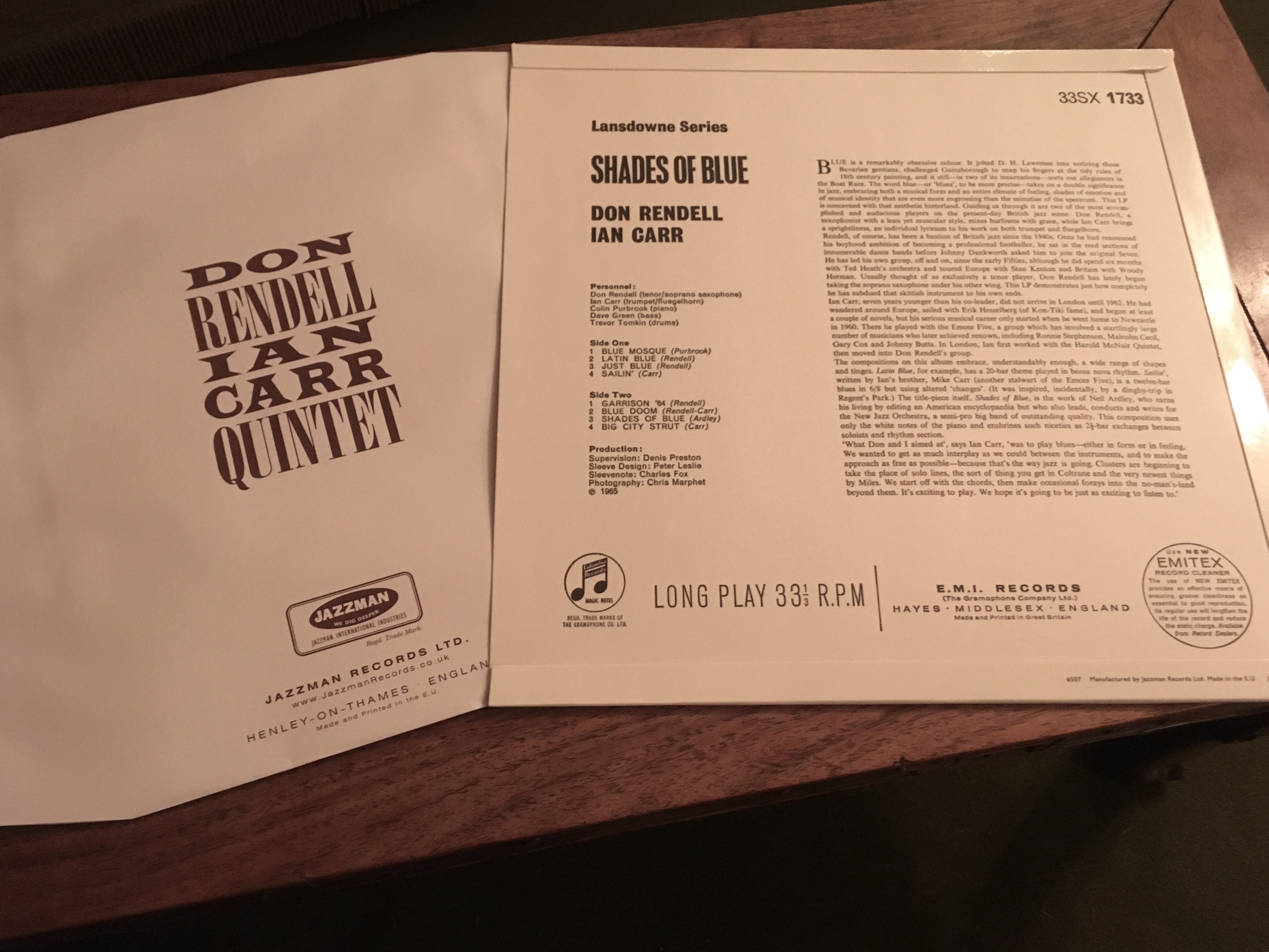 I'm most impressed that Jazzman managed to secure permission to use the Columbia and Magic Notes trade marks - a very nice touch. The inner sleeves are styled after the ones often used by EMI at the time of the original release but this time showing other Jazzman releases, and, joy of joy, anti-static lined as well! - again, a lovely touch.

Most interesting though is when you come to play the records.  I had a quick listen to the first two; Shades of Blue and Dusk Fire.  In my opinion these two are worth the entire cost of the set.  They are two of the finest British jazz albums ever, and would also easily make my all-time top ten, whatever the country.  In fact, with Shades of Blue, make that top five...  So when I dropped the needle into the run-in groove and sat back to listen, I was fascinated to hear that although Jazzman have replicated the artwork from the original mono releases, they have actually cut the reissues in Stereo!  The Stereo originals to the first two albums were never released, so this is a first on vinyl.  Up until now, you had to buy the excellent BGO CD reissue from about 10 years back to hear the (superb) stereo recordings.  But now, you can listen on vinyl, and I have to say that my preliminary impression is very favourable.

All I can say is that i'm really looking forward to listening to this set all the way through, and I hope that it turns out to be as good as these early impressions indicate it might well be.  If you love jazz then this reissue is a must-buy.  Hopefully there are still some copies out there at normal prices, so BUY IT and don't hang about.

Having resisted the temptation to go back to vinyl, this one time I wish I had. Richard I recall you mentioning Dusk Fire here before and luckily I have all the albums in this set on CD which are just wonderful.

Just wish this had been issued on 24 bit. From talk over on the Hoffman site it seems that Jazzman might have underestimated the popularity of this set which they say they have been working on over 20 years to secure and it appears that it is sold out. But not entirely sure this is the case yet? It is still listed on Bandcamp.

Funny I was wondering if you’d spotted this, so glad you got your set which looks stunning.

Andy, it’s sold out on Bandcamp and pretty much everywhere else, although I note that it’s still available to order on Amazon.com US site and Amazon.fr...

Tried to buy it last night but sold out everywhere. Just ordered. Shades of Blue alone is worth the asking price when you consider original copies go for well over a grand.

Great write up as well. Super thanks!????

Tony, good stuff. As for Shades of Blue, try closer to 4K for a mint original. That makes even the eBay scalper price of the reissue set seem reasonable.

I had a proper listen to the first three albums last night.  The pressings are generally very good. Which was a surprise as I had seen that Discogs listed GZ as the pressing plant, and my experience of them has been somewhat mixed in the past.  The LPs are nice and flat, and play with very little groove noise. Only side One of Dusk Fire was very slightly off centre, but well within acceptable limits, and if I hadn't seen it, it would have been tricky to tell.  The overall sound quality is quite superb here.  The LPs really allow you to hear everything from the tape - which, can sometimes be a double edged sword with old tapes, because any issues with the tape or transport become easier to hear. With these, there was a touch of pre-echo.  It may have been from the lacquer, or preview bleed through, but it might also have been down to a bit of print through on the tape, particularly if they had been stored for any period of time without having been back wound. There was also the sense of a bit of tape transport related flutter during one or two very quiet sections, but then these would be pretty much undetectable under normal listening on a less revealing system and certainly didn't detract from the overall performance.  Overall, Jazzman have done an excellent job with this reissue.

I see that ProStudioMasters have the 24/96 version of all the albums in this set on sale at $14.39 each

These are not the Jazzman Gerald versions so I guess they must be sourced from Universal. But alas I think ProStudioMasters are one of those sites that restrict purchases to US citizens or VPN users.

Just checked on Qobuz and most of them are available there as well.

Really? Do you have a link for the 2018 Lansdowne Hi Res package?

This is so great - thanks well spotted. I saw the the Decca Hi Res but couldn’t see any Jazzman 2018 versions.

Really? Do you have a link for the 2018 Lansdowne Hi Res package?

This is so great - thanks well spotted. I saw the the Decca Hi Res but couldn’t see any Jazzman 2018 versions.

Here is the link to one of them:

Scroll down for accurate description - clearly states this is the 2018 Lansdowne version!

I just ordered vinyl from amazon.fr. Fingers crossed it arrives ok sometime in the new year.

I just ordered vinyl from amazon.fr. Fingers crossed it arrives ok sometime in the new year.

Do you think they have information suggesting it will be repressed? I can’t imagine they will have copies in two or three months (as they propose) unless that is the case. All the information available is clear that the original pressing sold out almost immediately.

I don’t know they appear to have 2 copies in stock or at least they did when I ordered.

Worst case scenario I get my card refunded. I don’t think a repressing is in the offing. Some rumours suggest maybe individual albums may be released subject to licensing.

Well, perhaps you have been very lucky and their stock came through late. When I looked - in hope - there was no stock showing. Good luck with the order!